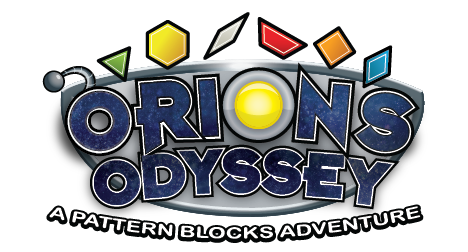 We took a brief hiatus from the blog so we could clamp down on finishing the game.  Development has been moving at breakneck speed, and we’re only a stone’s throw away from going gold. It’s been a crazy couple of months that saw some big changes for Hands On! Pattern Blocks. Like that it’s not called Hands On! Pattern Blocks anymore.

This wasn’t a light decision, of course. The game is still a follow-up to Hands On! Tangrams and shares many of the same gameplay mechanics, yet the core engagement of each is vastly different. We’ve spent just as much time introducing you to the characters and world of the game as we have discussing the new features and game modes because they are just as important to the overall play experience. To put it bluntly, the name Hands On! Pattern Blocks didn’t tell the audience what makes the game so endearing. We needed a title that would serve not just as an introduction to the game, but to the characters and world as well. So Hands On! Pattern Blocks is out, and Orion’s Odyssey: A Pattern Blocks Adventure is in.

Capturing the journey and adventure aspect of the plot was important to us, as well as introducing the main character, Orion. It seemed only natural to give him top billing in the title, and let players know they are going to be following him throughout the game. We felt so strongly about this, we incorporated elements of the character into the game’s new logo.  And of course, the pattern blocks still play a prominent role in the title – it is still a puzzle game, after all!

Followers of this blog and the game may need time to adjust to this major change (we still call it Pattern Blocks from time to time around our office), but with the enticing promise of adventure and the prominence of our quirky, robotic friend, we feel it is a big improvement. We’re always excited to hear what you think though, so feel free to drop us a line and let us know how you feel about the name change. In the meantime, stay tuned for more frequent updates on gameplay features, character and story details, and all other things Orion’s Odyssey related. Until next time!