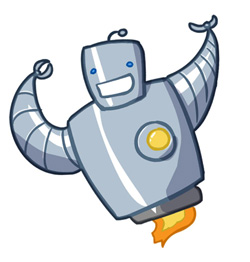 Every story needs a hero, and Hands On! Pattern Blocks is no different. From the beginning, we knew we were going to create something zany, light hearted and fun and needed a character who could embody those sentiments. Fortunately, we already had an artist who brought all three of those traits to Hands On! Tangrams, Matt McKenna. We already loved Matt’s artwork, but most of all his robot he made for the outer space level. We liked it so much, we made it the focus of our box art – twice! The robot tested well and made Tangrams immediately stand out on the shelf, so we thought why not make him the star of our next game? So the robot was in and Matt was made the lead concept artist for Pattern Blocks – all that was needed now was a name and a personality.

Orion got his name for two reasons. First, we knew he was from outer space and it was appropriately spacey. Second, at the time, Island Officials had four Ryan’s working at the company, so it became something of a running joke we brought into Pattern Blocks.

Orion has the amazing ability to build anything you can imagine, but not in the way most people would think. All he needs to do is imagine the shape (with a little help from the player and pattern blocks, of course!), and it materializes before him. When Orion discovers this ability aboard his rocket ship, he imagines it will be very useful for lots of people and possibly making friends, so he comes to Earth with the promise in his robot heart to help everyone with their troubles.

But Orion has a very unique approach to helping people. World hunger an issue? Nothing a few giant vegetables can’t fix! Have a pet who’s bummed out for one reason or another? Just make them a hat! Haunted mansion scaring away tourists? Remodel it into an arcade!

And so begins Orion’s journey on a foreign planet – a world filled with mad scientists, zombie pirates, gargantuan sea creatures, ghosts and dinosaurs who dream of going to outer space. Earth is truly an outrageous place… and we’ll tell you all about it in our next update!

Want to hear about updates as soon as they go up? Go to http://www.islandofficials.com/feed to add Island Officials to your favorite RSS feed!