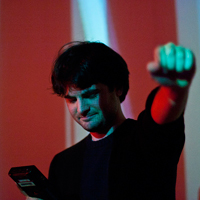 Paul Weinstein (former bassist of MJ Project, Philly’s favorite jamtronfusion monstergroup) started making music with Game Boys in early 2009. It was the sound he felt he was destined to create, a mix of old and new, a way to bridge the comforting video game tones he grew up with and the complex but catchy songs he was hearing in his head all those years later. It’s exciting, it’s pretty cool, and, above all, it’s some of the most fun he’s ever had making music. Enjoy!