Alongside Island Officials, Morrison is the lead instructor of the Game Design & Development AAS program at Camden County College.  Previously Morrison was a software engineer at The SI Organization, Inc. (formally part of Lockheed Martin), and from 1993 through 2008 Morrison’s involvement in the game industry was focused on multi-unit, specialty and big-box retail business development. During this time Morrison worked with companies such as Blockbuster Video, Funcoland, Gamestop, Toys R Us and GameCrazy.

Morrison is an active member of the Philadelphia Chapter of the IGDA (International Game Developer’s Association) and is also the founder/advisor for Camden County College’s Game Design Guild, sits on the board of the Woodbury Heights Community Center and is a current member of the Greater Woodbury Chamber of Commerce. His BS is in Multimedia Design from Wilmington University, Graphic Design and Art. He is currently taking Masters class in educational technology. 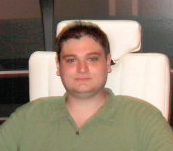 Tyler Ager is the creator of and driving force behind the mobile development program at Island Officials. He directly oversees all parts of production from concept to completion. Prior to Island Officials, Tyler worked as an instructor in Java, C++, Networking, Web Design, Graphic Design, Robotics, and Electrical Engineering, as well as in retail for Gamestop, and as a digital content specialist at Storm City Games. He has been featured on Destructoid, and G4, and only recently settled his ongoing feud with Adam West.

Tyler graduated from Camden County College where he received an Associates Degree in Game Design & Development. He earned electrical engineering certifications form Temple University, and attends Rowan University for computer science. He is an active member of the Philadelphia Chapter of the IGDA and is a current member of the Main Street Woodbury initiative and Greater Woodbury Chamber of Commerce.