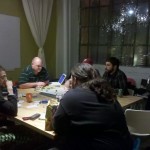 The Global Game Jam (GGJ) is the world’s largest game jam event occurring annually in late January. GGJ brings together thousands of game enthusiasts participating through many local jams around the world. GGJ is a project of the International Game Developers Association (IGDA).

The Global Game Jam was the brainchild of IGDA Education SIG director, Susan Gold, in collaboration with active IGDA members Gorm Lai and Ian Schreiber. GGJ was founded in 2008 as an IGDA event to broaden the outreach of the game education and the goals of Curriculum Framework while giving the world an opportunity to create games in the world’s largest Game Jam to date. The GGJ prides itself on collaboration, both in organizing as well as making of games. GGJ was inspired by and modeled itself after the Nordic Game Jam.

GGJ is a volunteer run organization, built upon the very hard work of the leadership, site organizers and of course the participants.

They allowed analog games this year so we teamed up with some folks and made a board game and a card game to boot!