Nintendo DS is Not a Dead Platform

A scrappy New Jersey game developer sets its sights on getting their Nintendo DS game on to retail shelves, and into player’s hands.

April 2, 2013 – Philadelphia, PA –  What does it take for a small game company to get it’s passion project published on the Nintendo DS?  Over the next 45 days we’ll find out, as Island Officials, an independent game developer based in Southern New Jersey will attempt to raise $85,000 on Kickstarter.

“The 3DS was released prior to us completing Orion’s Odyssey: A Pattern Blocks Adventure. And since were so far into development, jumping onto the new platform wasn’t an option,” said Ryan Morrison, CEO at Island Officials. “For us, it made the most sense to finish the game and find a way to release it on Nintendo DS.”

For two years Island Officials worked on Orion’s Odyssey  and completed the game in the summer of 2012. However, Island Officials created an inspiring puzzle game that seemed to arrive just a little bit too late to get the attention of major game publishers.

“Since its launch, over 150 million Nintendo DS units have been sold worldwide, making it one of the most successful consumer electronics of all time,” said Ed Fleming, Vice President of Business Development at Island Officials. “While new games are still released for the Nintendo DS, over the past year retailers have begun to scale back their stock of new Nintendo DS software. The shrinkage of retailer support has made it very difficult for most publishers to take risks releasing anything other than AAA sequels and licensed game titles.”

With the difficulty securing a traditional publisher for new Nintendo DS games, Island Officials is determined to find a way to get Orion’s Odyssey manufactured. Using Kickstarter as the primary funding platform, and by reaching out to friends, family and fans alike, Island Officials hopes to raise $85000 – enough funding to get the Orion’s Odyssey on physical cartridges, and into the hands of gamers. Kickstarter campaigns operate under an “all-or-nothing” funding model, so if the Orion’s Odyssey project doesn’t reach its goal at the end of 45 days then the game may never get to market.

Orion’s Odyssey is a comedy-puzzle game with memorable characters with a strong emphasis on presentation and a whole lot of heart.  The game follows Orion, an alien robot with the fantastic ability to construct any object he can think of. As Orion journeys around planet earth, he helps everyone he comes across, whether they ask for it or not! Together with his sidekick Ryan, a hyperactive seven-year old with a thirst for adventure, they will journey across ten unique levels filled with zany characters, odd creatures and a plethora of puzzles to solve!

To follow Island Official’s project, be sure to find us on Twitter (@Island Officials) and Facebook.  We ask that you help us by spreading the word about this fantastic game on your social media networks and consider donating as little as $1 to help the project come to life.  If you decide to donate more, you might be among the first in the world to play an outrageous comedy based puzzle game on an amazing platform.

If you’d like more information about the Orion’s Odyssey Project, or to schedule an interview please email rmorrison@islandofficals.com or send us a Tweet @IslandOfficials. 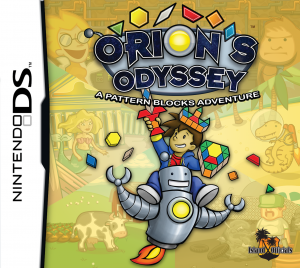