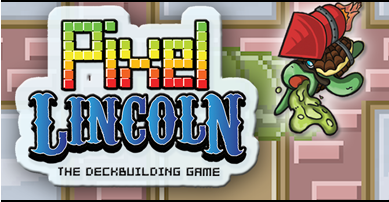 The 16-Bit President of the United States is starring in his very own deckbuilding game.

PHILADELPHIA, PA, May 29, 2012:  Island Officials is kicking off the “Summer of Abraham Lincoln” with Pixel Lincoln: The Deckbuilding Game; a card game version of everyone’s favorite Super Nintendo-era video games. The game was designed by award-winning game designer and creator of Pixel Lincoln, Jason Tagmire and will launch on the crowd-funding site, Kickstarter, on June 5th.

Following in the footsteps of deck building games such as Dominion, Ascension and Nightfall, and branching off into a world of it’s own, Pixel Lincoln: The Deckbuilding Game mixes the style of modern board games with the nostalgia of retro video games. With side-scrolling levels, power ups, cheat codes, extra lives, boss battles, checkpoints and most of all, high scores, it brings you right back to the glorious heyday of video games when Megaman was king and Samus was queen.

Pixel Lincoln: The Deckbuilding Game is based off to the upcoming Nintendo DS game, Pixel Lincoln. Our hero Pixel Lincoln is trying to save the world from John Wilkes Booth and his band of enemies, who stole Lincoln’s hat and disrupted the time-space continuum. Lincoln travels through space and time fighting enemies such as Luchadors, Puking Turtles, Skateboarding Dinosaurs, and Laser Sharks while using his trusty beardarang and whatever weapons we can get his hands on. (They’re usually made of some kind of meat.)

Jason Tagmire will be featuring the game at Origins Game Fair in Columbus, OH on June 1st and 2nd, and Island Officials will be promoting the game at E3 starting on June 5th.

About Pixel Lincoln: The Deckbuilding Game: In this classic adventure game, you will travel through time and space, searching for the pieces needed to restore the balance of time. There are enemies in every corner, and as Pixel Lincoln, you must defeat them…. but first you need to build an awesome deck! Equip the finest weapons, bring your best cheat codes, and do whatever it takes to get the highest score. The highly customizable game comes with over 200 cards and is playable by 2-4 players ages 10 and up. Gameplay is approximately 45 minutes.

About Jason Tagmire: Jason Tagmire is a game designer from South Jersey. He has been designing and self-publishing board and card games since 2007 under the name Championland, and has recently won The Game Crafter’s Resource Game Design Contest with his family-friendly resource management game, Sandwich City. He is the creator and designer of Pixel Lincoln, which is being made into both a Nintendo DS game and a deckbuilding card game by Island Officials. Jason is also the co-founder and writer for the pop-culture site Fruitless Pursuits, and the Kickstarter Curator for the IGDA Philadelphia chapter.