I’ve been working on Pixel Lincoln in various forms for a few years now. Right now, it’s a side-scrolling action/adventure game that’s in development for the Nintendo DS by Island Officials. But a few years ago, things were very different. 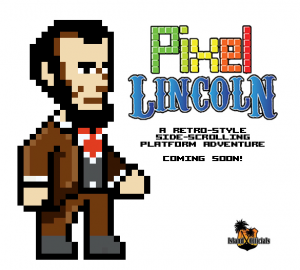 It all started out as a card game. In late 2008 I decided that I was going to create a few card games and get them printed by a short run card game company. I really wanted to make a side-scrolling card game that played like an old NES game. Before there was a theme to the game, I was using cut-out pieces of paper that were glued on top of Pokemon cards (commons only… of course!).  The cards were placed next to each other and the player would travel from left to right using a grid on the cards. 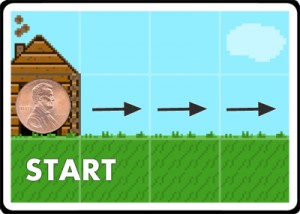 We needed a token to represent the player. Back then I didn’t have a ton of tokens lying around, so I went with the cheapest token available…. a penny. This evolved into thoughts of Lincoln as the main character and an image and name was born! 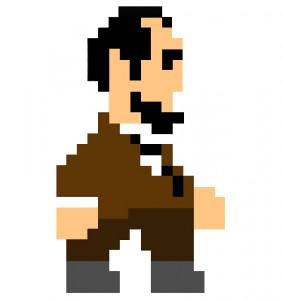 Pixel Lincoln. He was short and squat like Mario, which is the complete opposite of Lincoln’s shape. I think that’s what I loved the most about it.

We also needed enemies, lots of them. The game was going to be Lincoln (represented by the penny) going around defeating enemies and navigating the level. So you really never saw the Pixel Lincoln image while playing the game. We needed enemies that were as cool as Lincoln and I struggled. I made a quick farm level and made a pig and a crow and it was terrible.

I reached out to some creative friends online (many of which are contributors on FruitlessPursuits.com – Luke, Suzanne, Taylor, Grug, Stryder Wolfe) and started a message board thread called “Create A Pixel Enemy for Abe Lincoln!”. The enemies came in quick, and they came in AWESOME. The pig and crow were tossed and we now had tiny T-Rex’s, Puking Turtles, various Pixel dictators, Cave Apes, Caped Wolves, Laser Sharks, Fireball Shooting Ducks, Smiley Slimes, and much more. The world of Pixel Lincoln was formed. 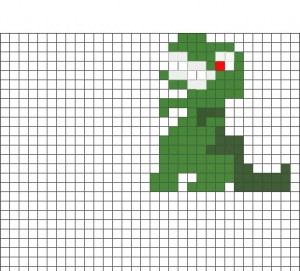 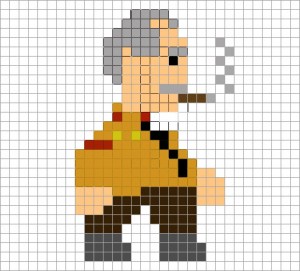 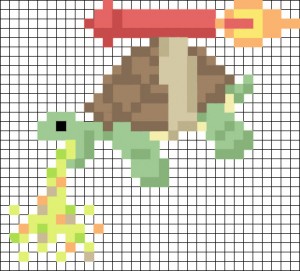 We made 6 levels that were classic retro sidescroller levels mixed with Lincoln specific ideas. There was a grass level, underground level, a water level and then Ford’s Theater, heaven and the future. We also made cover art that was HEAVILY inspired by old NES art mixed with Megaman (and many other games) style of showing super detailed artwork that looked nothing like the character that was made up of 7 pixels. 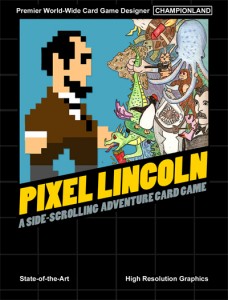 Eventually, the game was released. It came with a penny (which was kind of an issue because you cannot sell currency) but I wanted it to work outside of the US. I bought a few copies to distribute myself. It was and still is available online (http://www.championland.net), and it’s sold pretty regularly at it’s exclusive retail location, Guild of Blades in Madison, WI. It’s gotten some good feedback online, but I think it’s well overdue for a rule update. It was one of the first games I made, and probably the most well-known. 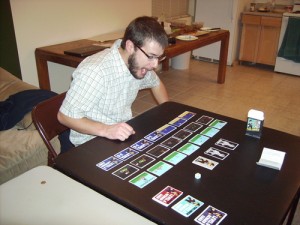 So how did it become a video game? Check back next week for part two, Pixel Lincoln: From Card Game to Video Game.