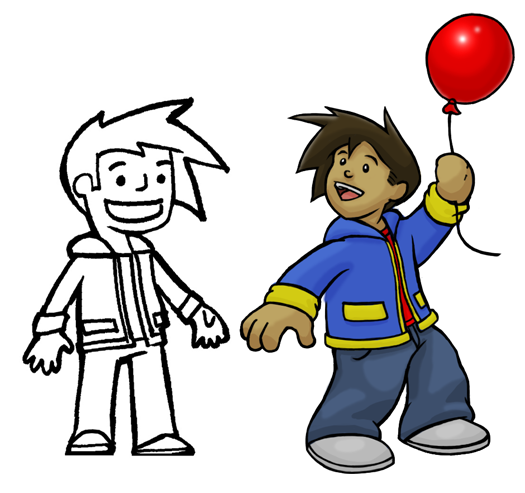 Every hero needs a sidekick, and Orion should be no exception. We knew that one character couldn’t carry the whole game by them self, so we needed to come up with an appropriate foil that would play off of Orion’s wacky personality in a natural way. Again, we looked to Hands On! Tangrams for inspiration.

The kid holding the balloon, the very first puzzle in Tangrams, was named Ryan during that game’s production. It was an inside joke, the same that also earned Orion his name; the large number of people named Ryan who were working at Island Officials at the time. Quickly we realized that this was the perfect sidekick for our hero. Since Hands On! Pattern Blocks’ primary demographic is children, giving Orion a buddy they could relate to made sense. Plus, what little kid wouldn’t want a robotic best friend?  Ryan was a natural fit. Once he was given the Matt McKenna style make over, all we needed to do was give him a personality.

At 7 (and a half!) years old, Ryan only has two modes: Super hyperactive or insufferably bored. Upon seeing Orion for the first time, he becomes really excited by the possibilities come with having his very own robot, but it takes a lot of convincing on Orion’s part before Ryan can understand how awesome his building ability truly is. After that, Ryan becomes convinced the two are a super hero duo and the two become inseparable.

Usually Ryan plays the role of the straight man to Orion’s antics, yet he has a few quirks of his own. He has a thirst for adventure but doesn’t like to stay in one place for to long, and has a tendency to speak faster than his brain can think. In short, he’s a kid; ambitious, manic, playful and wired all at the same time. Most importantly though, he provides Orion with companionship – which is good, because Orion will need all the help he can get when traveling in the strange world of Hands On! Pattern Blocks.