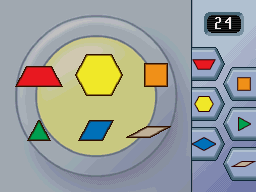 Guys and gals, I feel like I owe you all an apology. I’ve been so excited introducing you to the characters, the story and world of Hands On! Pattern Blocks, I forgot to introduce the most essential element; the game itself!

Pattern blocks are geometric manipulatives, much like tangrams. The objective is still to fill in the outline given to you using the available shapes. For anyone who’s played Hands On! Tangrams, the game-play should feel familiar. The simplicity and intuitiveness of the controls were a part of what everyone loved about HO!T, and it was important for us to maintain that level of quality. That doesn’t mean there aren’t changes, however!

The real stars of the game

The biggest change, other than the pieces themselves, is that you aren’t limited to one of each piece: you’re allowed to bring out up to 30 of any piece you need in order to solve the puzzle. In order to keep things clean and manageable for the player, we opted for the sidebar to use easily distinguishable buttons that can generate the desired piece on the fly; just press and hold the button and slide the piece off of the sidebar. This not only makes for a clean, easy to use interface, but also fits within the context of Orion’s building ability in the story. If a piece needs to be deleted for whatever reason, it can be picked up and put back on the sidebar and it will disappear, almost as if it was being put back where it came from.

Another change is that, unlike tangrams, where a puzzle can only have a few solutions, any pattern block puzzle can have dozens if not hundreds of perfectly acceptable solutions. While this makes them inherently easier than tangrams, it also offers the player more creative freedom. Lack of variety was an often cited criticism of HO!T, so in Pattern Blocks we used the open ended nature of the puzzles to create all new mechanics and features, many of which you’ll be reading about in the coming weeks.

One mechanic I do want to talk about is the game’s scoring feature. In most modes, once the player has solved a puzzle, they will receive a score. Each piece has a fixed numerical value, which has been tuned to deal out more points for either efficient or particularly clever styles of play. This score then gets added into an overall lifetime score. The score isn’t just for bragging rights however; it also serves one other important function. What is it? Keep checking back to find out!