When it was originally decided that we were going to make Pixel Lincoln into a video game, myself, George Tagmire, and the Ryans from Island Officials started to assemble a development team. We needed a medium sized group made up of artists, designers and programmers.. and it all started to come together quickly.

I was new to the group. My background in game design was only tabletop games at this point (with a little bit of RPGmaker thrown in), but these guys all went to school for game design. They’d previously worked together as a team, so everyone was comfortable from the start.

*no longer part of the team.

Although we were working under Island Officials, we still wanted to come up with a unique name for our group. We tossed around a lot of ideas and ended up with Faux Robo. Three of us loved the name. Most hated it. I convinced our illustrator (at the time) to come up with a logo to help sway the votes to Faux Robo. It definitely helped and after a lot of back and forth, Faux Robo became our name. 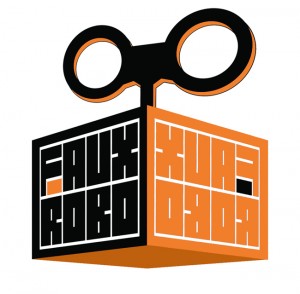 Turtle Tank was really close to being our name. So was HyperGo.

A few months after we formed.. after all of that work, we ditched the name and started to work as Island Officials. The week that we wasted coming up with a name seemed more of a waste than we originally thought. It was fun though, and it was our first project as a group. We still bicker about things as tiny as a single pixel, but it’s because we’re all really passionate.. whether it’s an awesome name (“Faux Robo”) or a terrible name (most of the list) it was definitely a glimpse into the future.

And speaking of the future.. next week we’re talking all about the game. What is is actually all about?!? Check back next week.